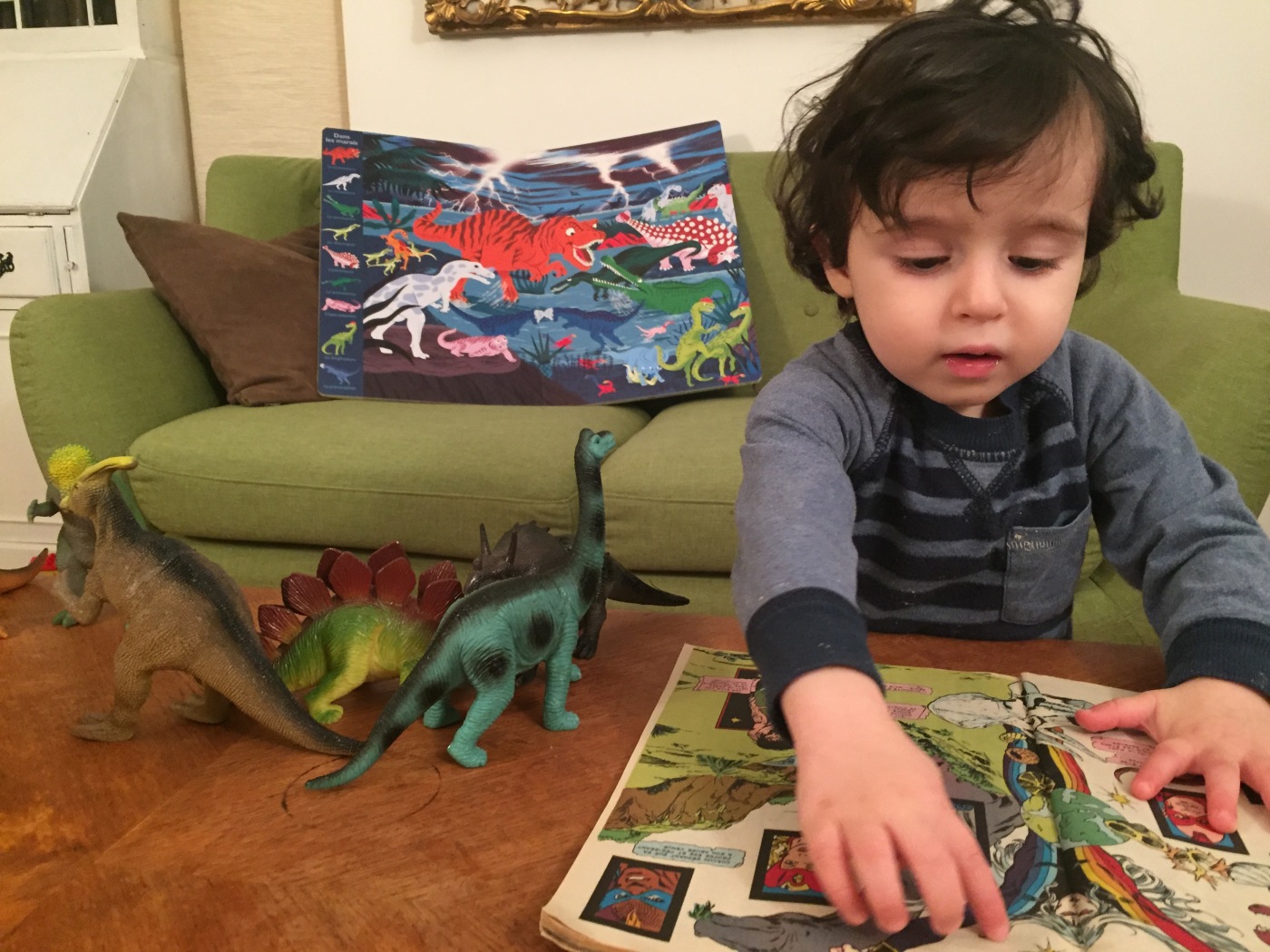 At 22 months Zef fell in love with dinosaurs. It was an accident that had the feeling of an accident waiting to happen.

Around our house there are always a number of books sprawled about, filling our bookshelves, lodged in the crevice between the window and the heating radiator, shoved behind the spices on the shelf above the oven, and, inevitably, resting, waiting to be read, on our coffee table. Amina recently pulled out a small collection of comics she had from when she was a child. If you look closely, right above the title of this comic, Les Défenseurs (Literally: The Defenders, though confusingly this French edition is a collection of Infinity Inc. stories and not Marvel’s The Defenders), you’ll see Amina’s handiwork declaring this her property.

I once collected comic books and had a few prized editions, including the first appearance of Gambit in Uncanny X-Men #266, and another first appearance, this one of Doomsday, the creature responsible for killing Superman, in Man of Steel #17 — in fact, come to think of it, I had the whole storyline leading up to the Death of Superman and those were all pretty valuable. At one point, my comic collection would have filled up the storage space we now have under our bed with likely some spilling out into the bookshelves and probably the closet.

Not a single comic was defaced with my name! Needless to say, I was both horrified and racked with a sense of nostalgia when this comic popped up, Amina’s childhood self scribbling her ownership just above the title.

But what does any of this have to do with dinosaurs?

Zef got ahold of this comic, flipped to this page, asked me what these creatures were and when I told him they were dinosaurs, well, the rest is history. He was hooked. A regular dino-maniac. He would NOT stop asking for “dinosaurs.” He’d point to the page and, like a record skipping, repeat dinosaur, dinosaur, dinosaur.

After a few days of this, I leapt into action. If Zef wanted to know all about dinosaurs, I would get him the best book a 22 month-old kid could possibly want!

Luckily, the fantastic Le Divan Jeunesse is near us at 226 rue de la Convention (Metro: Convention). They have a fantastic collection of kids books, including a lot of Montessori-method books. I was hoping for something more Montessori-related, but for dinosaurs, I guess there isn’t much.

Instead, what I discovered was a giant, colorful edition printed on stiff, sturdy cardboard pages titled: Mon tour du monde géant des dinosaures. This book by Laure de Faÿ, published by Sarbacane, lists all the proper names of the dinosaurs, which has given Zef a wonderful challenge.

When we first opened this edition, he wanted to point to all the dinosaurs. He could identify them by color and whether they were running, sitting or flying. With the side column that provides the names, we are teaching him the names of the dinosaurs. He doesn’t know them all… yet. But when we ask: “Where is the brachiosaurus?” His response is immediate!

Though he might be a little too young and perhaps intimidated by it, we will take Zef to the Museum of Natural History in the next few weeks. We’ll see what he thinks about the dinosaurs at this kid-friendly museum and, who knows, maybe we have a future paleontologist on our hands? The question is: Will he be more like Indiana Jones or Ross Geller?